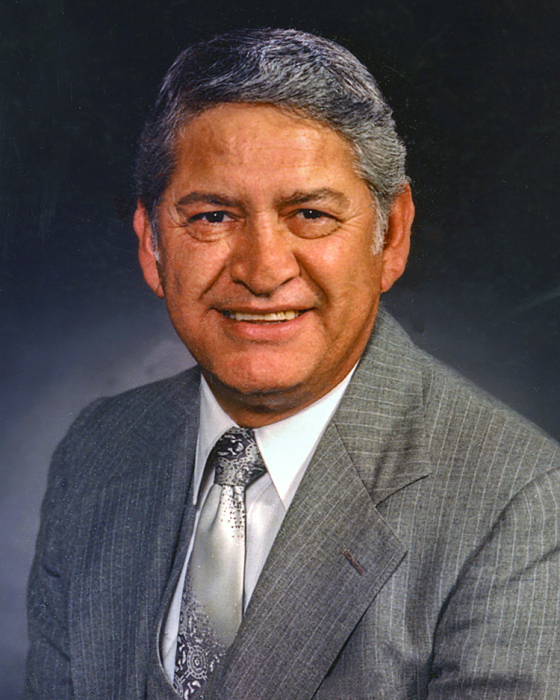 Lou was born October 18, 1934, in Rocky Ford, Colorado, to Fermin and Josephine Lopez. During the first thirteen years of his life, he experienced the adventures of growing up on a farm with his parents and three younger brothers, John, Bill and Ad. As Lou was entering high school, the family moved to Denver. He attended Annunciation High School and excelled in basketball and baseball. Lou was a leader and captained the Annunciation Cardinals in winning the Parochial League State Basketball Championship in 1953. Lou was selected to the All-Tournament All-star team and was named as the MVP of the tournament. On graduating from high school, he joined the U.S. Army and served two years in Germany in an armored tank division. Following his military service, he attended the University of Colorado and then Regis College.

In 1963, Lou moved to Southern California to take part in the booming aerospace industry. He initially worked for North American Aviation/Rockwell on the Apollo Program. He  was later recruited by McDonnell Douglas and was assigned to the DC-10 project. Lou returned to Rockwell to support the Space Shuttle Program. It was at Rockwell where he met and married the love of his life, Sherry Alewyn.

Lou later transitioned to procurement administration as a Small/Disadvantaged Business Administrator for the Boeing Company. He was proud of the work he did in providing small and disadvantaged businesses the opportunity to participate in the procurement process. His aerospace career relocated him and his family to Chicago, Seattle, and eventually back to Southern California. He retired as Northrop's Small/Disadvantaged Business Administrator in 1994. He returned home to Denver where he enjoyed time with his family and friends. In his retirement, he was able to focus on his love of golf and the 19th hole. Sherry's career eventually took them to Idaho Falls, Idaho, where he remained until his death.

Lou was a steadfast fan of the Denver Broncos, Colorado Rockies, and UCLA Bruins basketball. He supported those teams through thick and thin. Lou was a member of the Annunciation High School Hall of Fame, and he, his brother Bill and sister-in-law Celia, were among a team of dedicated Annunciation alumni who organized an annual golf tournament that raised over $200,000 for Annunciation student scholarships.

In lieu of flowers, a donation to the Annunciation School student scholarship fund would be deeply appreciated.

Plant a tree in memory of Louis by clicking here.
To send flowers to Louis' family, please visit our floral store.

Plant a tree in memory of Louis
An environmentally-friendly option

Plant a tree in memory of Louis

2 trees planted in memory of Louis

Dear Sherry,
You are in my thoughts and prayers in the passing of your devoted soulmate, my cousin Lou. I pray you find God's comfort in the sadness and heaviness your heart now carries.
Sincerely,
Juanita Traufler

A Memorial Tree was ordered in memory of Louis Eloy Lopez by Juanita Traufler.  Plant a Tree

Cousin Lou was the oldest of cousins on the Lopez side of our family.  I remember cousin Lou having a soft, gentle, quiet voice just like his character.  I respected Lou and saw him as having authority over all the cousins.  I saw him as setting the platform, the foundation for us.
Lou visited me in Fridley, MN.  I don't recall if he was attending to business in Minneapolis. Possibly his pleasant visit was from traveling to or from Chicago.  Nonetheless, it was a very pleasant time he shared with me and my three children.
I recall photos of him taken with his Army uniform and feeling proud, very proud of him.
Myself, my cousin Connie and Grandmother (Maye) took a trip to Southern California.  During our time, Lou and Sherry hosted our visit to them for a few days.  We were welcomed with open arms, kindness, joy, and a "so happy you paid us a visit" kind of warmth.  Lou took us sight seeing.  I remember Tiajuana as one of the outings. I also remember a trip to Disneyland.  He drove us to see other family our Maye wanted to visit with.  The days we spent with Lou and Sherry was never short of smiles and great joy.
We were in touch by way of FB.  I will miss Lou's occasional posts, comments and opinions.

A Memorial Tree was planted for Louis Eloy Lopez

Plant a tree in memory of Louis